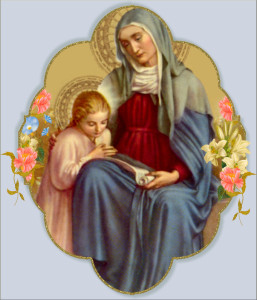 The Feast of St. Anna was one of the best that we have experienced in years. Some of the key features was an aggressive outreach to members who have been absent for a time. Many of those “members” joined us for the Feast and showed support for the show following the Feast. Another “innovation” was to host the Feast in conjunction with Anna’s Place Summer Camp concert. The end result of that was that several parents, non-members, joined us for food and fellowship then joined in the Camp concert. I have never seen such support for the children. Well done one and all.

Anxiety was named as a potential for changes in the church. I expect that from time to time such may arise. The response should always be a ‘non-anxious’ presence that is remain calm, work through the conversation, and don’t become reactive to any anxious or critical comments. Now this will be a new experience for this congregation because in general it has been a well adjusted community exhibiting a largess of spirit, gentle hearts, and an ability to adapt to new circumstances. One of the sources of the anxiety that may manifest is in the several transitions announced during our Feast.

Darryl Durham, Community Engagement, Anna’s Place NOLA Co-Founder.  Will remain on staff developing an expanded platform to help children 14-17 navigate next steps for school, future mentoring, and engagement. He will expand his work in community engagement as the primary spokes person for Anna’s Place. We expect his commitment to be 1 to 2 years before he retires.

Diana Meyers, Clerk of The Dodwell House Restoration Team and staff for that team. (In transition) She will continue to mentor Anna’s Place’s new Director as part of the transition. Over the next year she will slowly move to a more part time position as demands of the Restoration Team dictate. She will over time do more work out of her home.

Yulene Velasquez, has resigned. We wish her well.

Brianna Carr, will be filling a newly created position as Director of Anna’s Place NOLA. Brianna holds the following degrees/certificates:  M.A. Humane Education; B.S. Psychology; A.A. Sociology; Certificate in Grant Writing. Brianna is NOT replacing anyone she is creating a new position and strategy to expand, improve, and standardize (as much as is feasible) our current Anna’s Place Program. She will be working with …

Te’Era Coleman, who will be filling the role of Student and Volunteer Coordinator; we expect that role to change and evolve over time. Te’Era holds the following degree and designation:  B.F.A. Acting and Theater; Certified Scrum Master (CSM).

Ken Leach, will be filling a new role and traditional role. He will be a choral development Director at Anna’s Place, creating and building a children and community choir. In a traditional role he will be Organist/Choir Master for the church.  Ken holds degrees of  Master of Music, B.A. Music Education. He has been doing choral and organ work for over 40 years including adjunct faculty positions and church choral directorships. For the immediate future the Church will be paying 100% of his stipend. The hope is to transfer some of that cost to Anna’s Place as new sources of income are developed.

Darryl Guidry, has been and will continue as Anna’s Place NOLA Master Chef and food services coordinator. Darryl has a Culinary Arts CEC designation; is ServSafe Certified and has over a decade in the food services business. We recently calculated meals served and for once I understated the number. We serve over 4,000 meals during the Fall/Spring semester that does not count meals served during the four weeks of summer camp.

Know these facts and folks. The foregoing are the new Team for Anna’s Place, Restoration Committee, and Church music program. Those are a lot of changes. Please be and remain familiar with the personnel the more that you know and the more that you can share the more transparent we become and the lower the anxiety.

The Dodwell House Restoration Committee members are:  The Rev. Deacon Buck Close, Chair; Kirk Toups- ex officio; William Glew; Lucy Close; Jim McMillan; Joe Cocchaira; ex officio Fr. Bill Terry; ad hoc members include Allison Reid and Daniel DelSol. Our architects are Mathes- Brierre (MB). As of this writing the Committee will receive a new contract for work by MB which will include expanding their role as “owners representative” in working with Contractors. Further, the Committee has been tasked with drafting a set of proposals that will include community and minority involvement in the building project by way of preferences. Several meetings must still take place fine tuning the design of the facility.

Estimated cost of construction is currently set at $1.4-1.8 million. We have pledges of $1.2 million and an estimated $200,000 in Historic Tax Credits. The committee has set as a fund raising goal $3,000,000. The additional funds raised are earmarked for building cost over runs (which is likely), investment for furniture and fixtures for Dodwell House; establishing a seed account for Endowment for Anna’s Place NOLA programming; Establishing a seed account for the future repair, operation, and maintenance of the Dodwell House Facility.

The Committee is at the point, presently, to name a Capital Campaign consultant having done a feasibility study. That person, nominated, is Kathy Seligman (who conducted the feasibility study). Once again a contract will be penned for her services at the appropriate time. With the consent of the Vestry and after a final review.

Public Relations is something that St. Anna’s has done well in the past. That said, as we increasingly move toward more dynamic transitions staff time to do a good job of P.R. will become increasingly difficult. In order to raise awareness and funds for our projects it was suggested by Lucy Close that a P.R. Firm be hired. Initially I rejected the idea thinking of our past accomplishments. However reconsidering time and distance (it has been 5 years since we made any media coverage) we are now considering such a move. We will first consult with our fundraising expert (see above) to determine if this necessary or even feasible.

Joel Dyer, has been named “Artist in Residence” at St. Anna’s. His duties will include working with others on acquiring state tax credits for the Dodwell House project; seeking grants and funding for a major “art” installation in our church that will represent all the Victims of Violence. The installation is titled “Star Gazers.” He will offer consultancy and renderings of any artistic adornments that may be needed for Dodwell House. His stipend will be housing supplied for about one year in the Dodwell House guest quarters with reduced rent as compensation.

Seminary students, Luigi and Allison are continuing in their studies. Allison as some know is doing her CPE work at Ochsner Hospital. It is high energy and emotionally draining as such course work always is. She will be with us until early to mid August. Luigi will start his distance learning seminary work again in late August. Our support continues. Keep them both in your prayers. Also of note, Luigi’s sermon of two weeks ago was printed in Ambush furthering his mission to the LGBTQ+ community.